Throughout the decades, the term “movie” has been referred to as the big screen, the silver screen, widescreen, film or cinema and has often denoted a shared amount of time with a shared audience; a shared experience that has the potential to populate the popular imagination beyond a viral internet YouTube moment.

Toronto-based painter John Abrams has been “capturing the moment” of classic film through his paintings for the past decade or so, referencing glamour and drama through iconic performers and staged settings which have, over time, become part of our shared collective consciousness. Films such as Godard’s 1960 classic “Breathless”, starring Jean Seberg, or the master of suspense, Alfred Hitchcock’s 1954 “Rear Window” starring Grace Kelly and James Stewart or more recently the 1992 “Orlando” film, based on the novel by Virginia Woolf and starring film performer Tilda Swinton, have all become part of the Abrams paint palette. 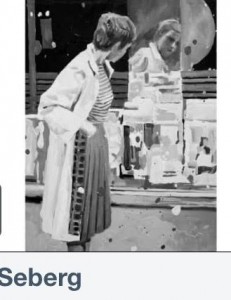 Through his paintings, Abrams suspends the motion of the film, allowing viewers to reflect on classic cinematic images that remain part of our societal landscape. In reviewing his solo exhibition at McMaster University in 2008, Heidi Kellett states that the paintings translate the film images, in order to “interrogate not only the state of figurative painting, but also the tendency of popular culture to absorb and transcribe film into the realm of everyday life”.

In his interview with writer RM Vaughan for the National Post, Abrams insists, “painting needs to have a conversation with film and video, because film is the dominant visual media of our time. ” The artist states further that his approach to painting “ allows me to communicate to the viewer in a common vocabulary and offers a point of entry into the ongoing dialogues that make up contemporary culture.” 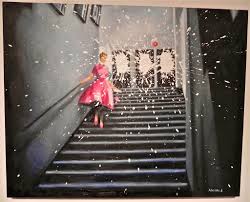 John Abrams holds an MFA from York University and is an associate of the Ontario College of Art and Design. A founding and current member of Loop Gallery in Toronto, where he shows on a regular basis, the artist is represented by Boltax Gallery in New York and Evans Contemporary in Peterborough.

The Art of the Curate

The Art of the Curate

Buy What You Love! In the studio with Scott MacKenzie, painter

Art Starts and ArtBomb Working Together

Yes, You Can Buy More Art!